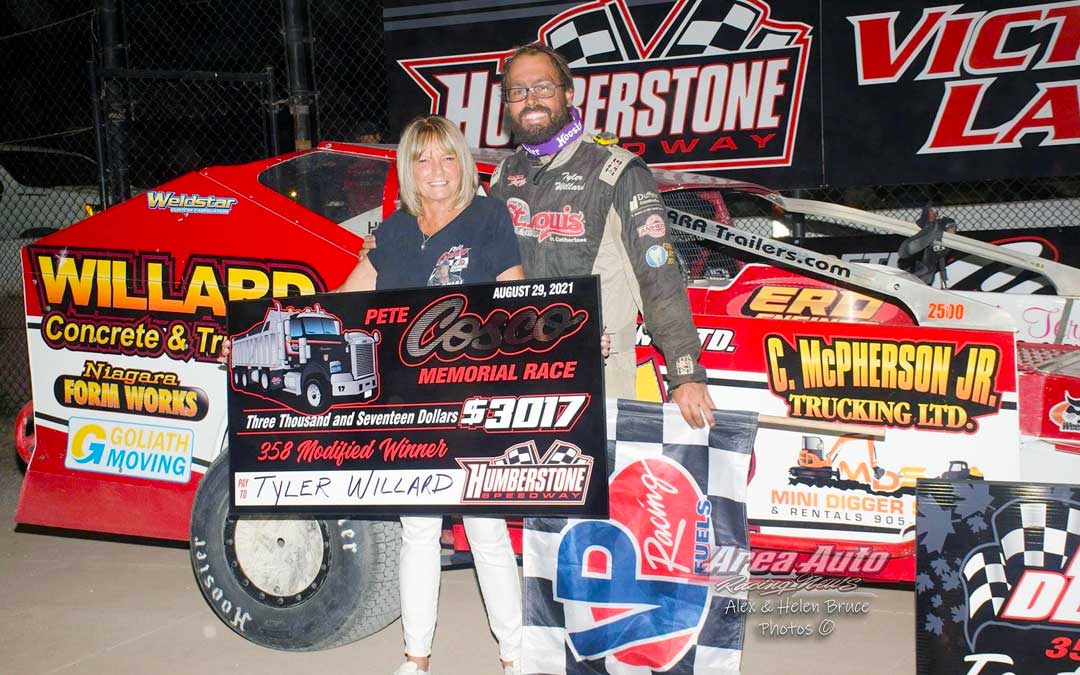 PORT COLBORNE, ONTARIO (August 29, 2021) Tyler Willard from St. Catharines, Ontario picked up what would be one of the biggest wins in his career Sunday night as he won the 40-lap Pete Cosco Memorial for the Rick’s Delivery Modifieds at the Humberstone Speedway. The victory earned Willard $3,017 for his efforts. Willard wasn’t the only family member to visit Pete Cosco Victory Lane, as Cody McPherson from St. Catharines, Ontario won the Stirling Lubricants/Champion Racing Oil DIRTcar Sportsman feature event, which paid $1,517 to win. Charlie Sandercock from Belleville, Ontario won the $1,517 to win race for the Pro Fabrication/Luke’s Racing Engines Late Models as part of the Northeast Late Model Alliance. Justin Ramsay from Belleville, Ontario won the GR Enviro Rail Street Stock feature that paid $817 to win. Austyn Werstroh from Niagara on the Lake, Ontario won his second feature of the season for the Dow Auto Supply Mini Stocks and collected $517 for his efforts.

Before Sunday night, only Mike Bowman, Mat Williamson and Erick Rudolph have been victorious in the prestigious Pete Cosco Memorial for the Modifieds. In the end of the 40-lap event, it was Tyler Willard picking up the victory and the $3,017 payday that awaited him in Pete Cosco Victory Lane. Willard picked up the win over Fred Carleton, Gary Lindberg, Mat Williamson, and Chad Chevalier. Dylan Davidson, Pete Cosco’s grandson finished 11th in his Pete Cosco Haulage number 73.

The Northeast Late Model Alliance for the Late Models saw teammates battling for the win, and it was Charlie Sandercock picking up the victory. Last Sunday night’s feature winner Sam Pennacchio finished in third place, with Eli Mayhew and Adam Turner completing the top five.

Justin Ramsay and Austyn Werstroh are no strangers to victory lane at Humberstone. Ramsay, who has an All- Canadian Championship win to his credit picked up the win in the Street Stock feature over Pete Reid. Austyn Werstroh won his second Mini Stock feature of the season, holding off Tyler Lafantaisie and Leroy Buscumb.

Humberstone Speedway will return to action on Sunday, September 5th for the Labor Day Shootout, featuring the $1500 to win DIRTcar Sportsman feature. Joining the Sportsman will be the Late Models, Street Stocks, Mini Stocks, and the second visit of the season by the Mod Lites. The program will get underway at 6:30 pm and tickets will only be available at the grandstand gates.