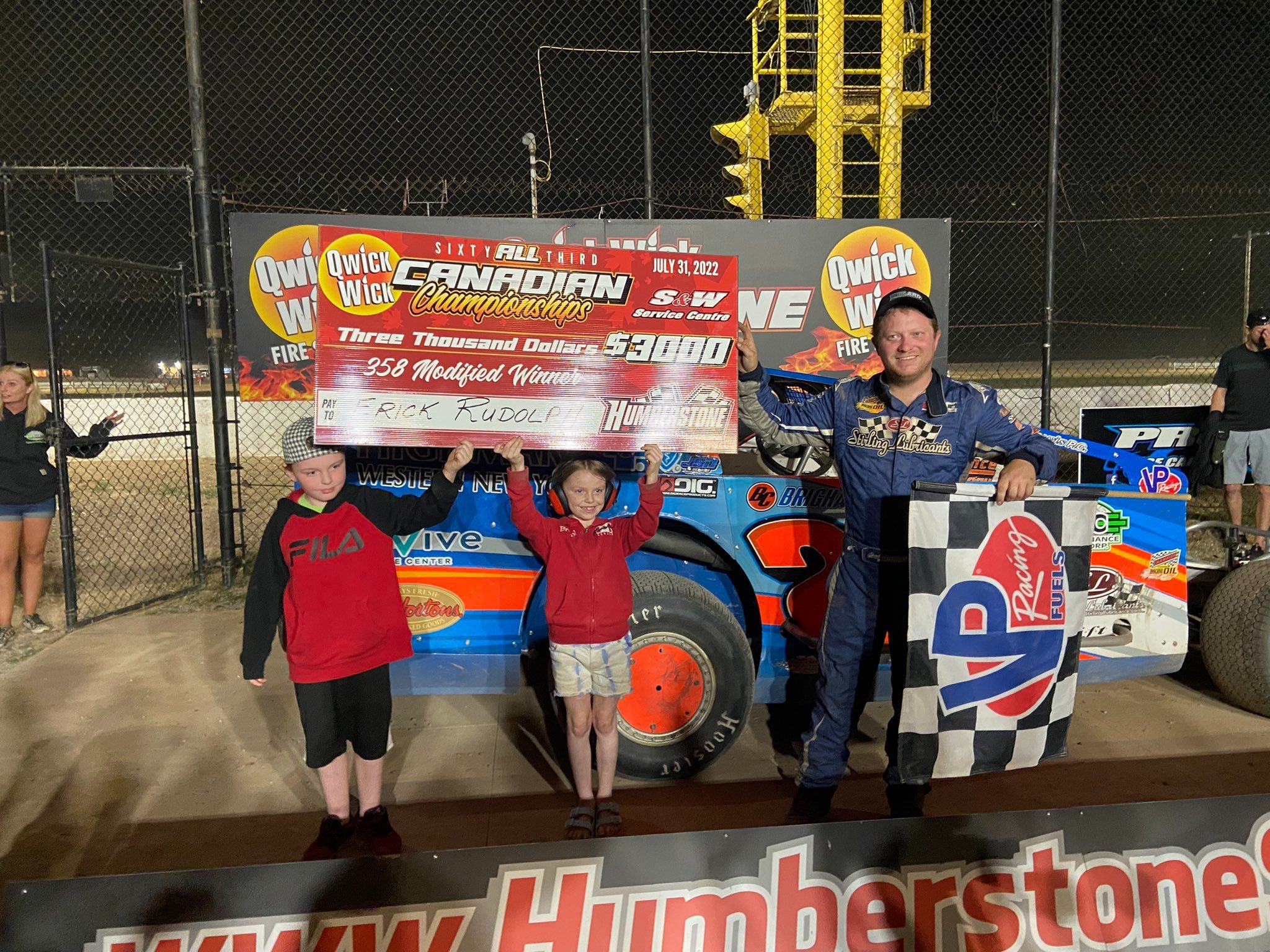 Rudolph Edges Williamson in All Canadian at Humberstone

PT COLBORNE, ONTARIO – Veteran Erick Rudolph, from Ransomville, NY, has won many Modified races in many places, with several championships to his credit, including the BRP Modified Series, and he is the current defending co-champion at Ransomville Speedway. On Sunday, July 31st, he invaded Humberstone Speedway for the 63rd All Canadian Championships, the longest running event in Canadian Motorsports and ended up in a duel with his Ransomville co-champion, Mat Williamson, for the win in the 50 lap Modified feature, the concluding race in the two day event. A large crowd was on hand for the festivities.

Eighteen Modifieds were on hand this night for the headline event, with former Merrittville champion, Gary Lindberg starting on the pole, flanked by Dave Flannigan. While Lindberg bolted to an early lead at the drop of the green, Rudolph and Williamson were on the move, as well, with Rudolph jumping into second and Williamson fourth after starting seventh, and then third on lap five. Meanwhile Lindberg built a half straightaway lead.

Cautions on laps 11 and 14 bunched the field, with Rudolph hectoring Lindberg on the restarts, while searching for some grip on the outside, as the bottom was the fast way around this night. The lap 14 restart showed a top five of Lindberg, Rudolph, Williamson, Chad Chevalier, and Mike Bowman. As Lindberg drew away once more, Williamson engaged Rudolph for second.

The pivotal moment in the race followed a lap 23 caution, when Rudolph, who had found traction on the outside, jumped past Lindberg high in turn three on lap 25 to take the top spot. Williamson immediately followed suit, claiming second on lap 28, and the race, as they say, was on. Williamson was able to close on Rudolph, who had built a big lead, but even though he tried the high ground, Rudolph was able to fend him off. He had another chance when the leaders entered lap traffic, but Rudolph, one of the best in the business at negotiating through the slower cars, held sway.

Williamson had one final chance when the caution flew on lap 47, but was unable to solve Rudolph over the final thee laps, though he was able to worry him. At the line, it was Rudolph over Williamson by a little over a car length, with Lindberg, Chavalier, and Bowman completing the top five in an entertaining race, which paid $3,000 to the winner.

In Victory Lane, on the pass for the lead, Rudolph offered, “I was running the top, tickling it a little bit earlier in the race. Finally, on a restart, I was able to bury it in there (in turns three and four) and maintain. Once I got the lead, I tucked it to the inside. I didn’t want the tires to get hot. The car was on rails.” He added, “It was a good race. I did well last night, and we’ll see what tomorrow brings (race at Merrittville).

In the 40 lap Sportsman feature, which paid $1500 to win, former track champion Cody McPherson, from St Carharines, parlayed a fast car and a good starting spot to dominate the race. He started on the outside of the front row in the 22 car starting field and immediately outgunned polesitter Jordan Cosco to grab the lead. Early movers were Billy Bleich Jr., who moved into second and veteran Greg Panunte, who took third on lap five after starting sixth.

The only cautions in the race, two of them on lap 11, kept things close, but on the final restart, McPherson once again drew away, while Panunte and James Friesen staged a spirited battle for the runner-up spot, with Friesen ultimately claiming the spot on lap 13. The only challenge for McPherson over the remaining laps were lap cars running side by side at times, but he enjoyed such an advantage that they posed no real problem, as McPherson led every lap. At the line, he was comfortably ahead of Friesen, with Panunte, Bleich, and Brad Rouse rounding out the top five.

The 25 lap Street Stock feature, with 23 cars taking the green, paying $1,000 to win, featured a strong performance by “The Crazy Alien,” Pete Reid, from Stevensville, who grabbed the lead from Craig Handley on the second lap and then fended off challenges from Jason Fontaine on three restarts to score the victory and collect the $1,000 winner’s check. He drew away over the final ten laps to win by a straightaway. Handley, Ron Loggie, and Brock Gregory followed Fontaine to complete the top five.

The Mod Lites, 18 strong, ran 20 laps, with veteran Josh Sliter, from Pt Colborne, coming from eighth to take the lead on ,lap nine and then dominating from there, easily weathering a lap 16 caution in the process. Tyler Winger, Rob Misener, RJ Pietz, and Dillan Sliter completed the top five.

Finally, the Mini Stocks, with a healthy 23 cars on the grid, ran a 20 lap feature, which saw Tyler Lafantaisie, from Thorold, streak from ninth to take second on lap two, then grab the top spot on lap three and opening a half straightaway lead. He easily navigated three subsequent restarts to take the win going away over Clinton Barrick.

NOTES: The healthy car counts in all the divisions and the enthusiastic crowd, bodes well for the Speedway, which has shown dramatic improvements under owner Terry Vince……………….Also, kudos to long time race director at Ohsweken Speedway and Dirtcar, Doug Leonard, for running an efficient, fast-moving program after a delayed start, sending the fans home at a decent hour…………………….Rudolph, who counts Humberstone as one of his favorite Canadian tracks, with a previous Dirtcar Series win there, among other victories, was making his first post-covid start at the facility, and it looked like he had never been away.