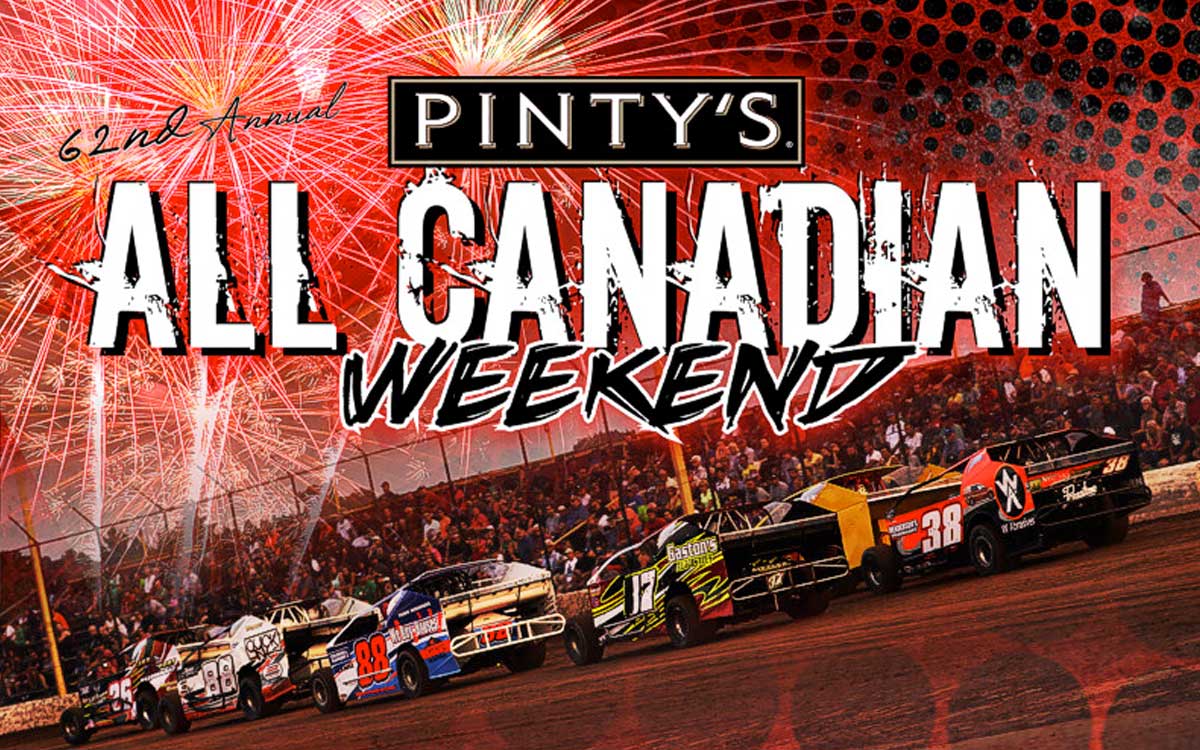 PORT COLBORNE, ONTARIO (July 15, 2021) The historic All-Canadian Championships at Humberstone Speedway will be rewriting the history books in 2021 as Pinty’s Delicious Foods will present the three-day All Canadian Championships that will be taking place from Friday, July 30-Sunday, August 1. The Pinty’s All Canadian Championship weekend will feature the Knights of Thunder 360 Sprint Cars, Action Sprint Tour, Modifieds, DIRTcar Sportsman, Late Models, Street Stocks, Mini Stocks, and the DIRT Nostalgia Tour.

With FREE live entertainment and FREE camping all weekend, the All-Canadian Championships will once again bring the party all Civic Holiday Weekend long.

The Friday, July 30th program will feature the Knights of Thunder 360 Sprint Cars in a 25-lap feature paying $2000 to win. The Action Sprint Tour will also race in a 25-lap A-Main that will pay $1,000. The GR Enviro Rail Street Stocks will run in a $500 to win feature and the Dow Auto Supplies Mini Stocks will race in a $300 to win, 15 lap feature race. Soul 69 will be performing out in the camping area beginning at 10:30 pm.

On Saturday, July 31, the Knights of Thunder 360 Sprints and the Action Sprint Tour will return for night two of their doubleheader weekend. The two Sprint Car divisions will be joined by an open race for the Late Models. Any crate or open motor Late Model can be in competition in the 30-lap feature paying $1500 to win and $200 to start. The DIRT Nostalgia Tour for Vintage Cars will also take part on Saturday night. Jane and the Whipper Snippers will take the Humberstone stage at 10:30 pm Saturday night.

Sunday, August 1 will feature the Rick’s Delivery Modifieds in a 40-lap event paying $2500 to win and $250 to take the green. The Modified event is being presented by S&W Service Centre and Pinty’s. Also on the card will be the Stirling Lubricants/Champion Racing Oil DIRTcar Sportsman in a 30-lap feature paying $1,500 to win. The GR Enviro Rail Street Stocks will headline the All-Canadian by running a 75-lap feature paying $3,000 to win, $100 to start sponsored by Peacemaker 420. The Street Stocks will also have a B-Main that will pay $500 to win and will also include contingencies. The Dow Auto Supply Mini Stocks will also be competing in a $1000 to win event with their B-Main paying $300 to win. The events for the Street Stocks and Mini Stocks are part of the Insta Panels Duel on the Dirt. The Jay Diem Band will be the featured live music entertainment after the completion of the event.

If weather forces speedway management to call the show, the rain date of Monday, August 2 will be utilized. For example, if the Friday show gets rained out, then that program will be raced on Monday, and so on.

Humberstone Speedway would like to announce the debut of a brand-new website thanks to ImageFactor.ca The new website for the speedway can be found at www.humberstonespeedway.ca and will be launched in the coming days.

Times and admission prices will be released on the speedway website, as well as the speedway’s social media channels.

About Humberstone Speedway: Humberstone Speedway is located just two miles East of Port Colborne on Highway 3, just 17 miles west of the US/Canadian Border at the Peace Bridge (Buffalo/Fort Erie). For more information, call (905) 329-8028, visit us on Twitter @HumberstoneRace, and like us on Facebook. Don’t forget to bring your portable FM radios and listen to all the action on 89.9FM.